Wake-Robin Golf Club is believed to be the oldest African-American woman’s golf club in the country. It was named after the purplish wildflower with gold stamens that sprouts in early spring. 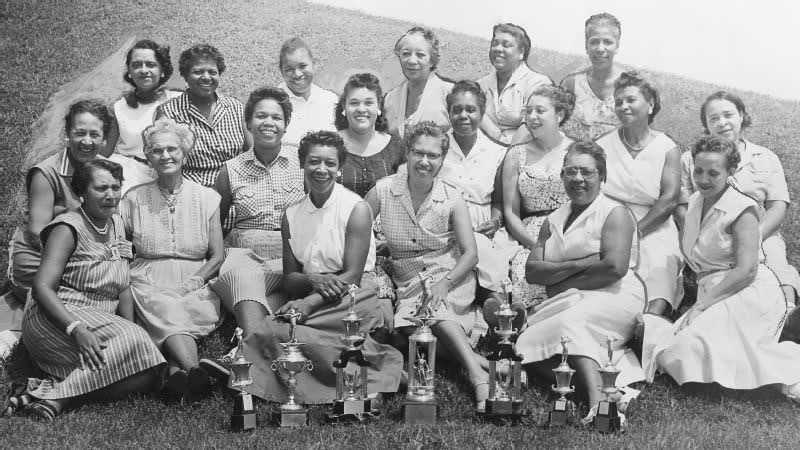 The genesis of the Wake-Robin Golf Club can be told through members like Elizabeth McNeal. McNeal, 98, grew up amid seven siblings in Grindstone, Pennsylvania, where her father worked as a coal miner for 25 years before he moved the family to Washington to lessen the expense of housing the two older children attending Howard University.

Her father became a preacher, and as for her mother …

“There was nothing for women to do in those days but keep house,” McNeal said one recent morning, her days quieter now after suffering a heart attack last year.

When she was around 17 years old, McNeal sang in the Jerusalem Baptist Church junior choir with her dear friend, Fredrica Lewis. Lewis’ sister, Sarah Smith, one day invited the girls to a meeting at her home to learn, of all things, the sport of golf — a game segregated then for men, particularly white men.

“I had never heard of golf before,” McNeal said.

The golf meetings began in the northwestern D.C. home of Helen Webb-Harris, a school teacher and a golf widow, the term for wives who lose their working husbands’ spare time to the golf course.

During the meetings, the young women reviewed literature about the rules of the sport. They also watched the women play on a nine-hole golf course, converted from an abandoned trash dump by the city.

“I think the main thing that made us go was that they were serving hot dogs and hamburgers and soda,” McNeal said with a laugh. “And we would jitterbug and then go home.”

Today, the Wake-Robin Golf Club is believed to be the oldest African-American woman’s golf club in the country. It was named after the purplish wildflower with gold stamens that sprouts in early spring. The resplendent flower symbolizes the club’s budding against the limiting thoughts, including of their husbands, of what women should and could do in the largely male, largely white male, world of golf.

During the Jim Crow era, some women of Wake-Robin putted onto municipally owned white-only golf courses, such as East Potomac, their presence a protest while crowds hurled racial slurs, rocks, eggs or golf balls at them.

“That didn’t stop us,” said Winnie Stanford, 94, a board member who is listed as a female legend in a United Golfers Association commemorative book. “If you make up your mind that you’re going to do something, you’re going to do it. Black women have always been strong anyway.”

The club, joined by its brother organization the Royal Golf Club, petitioned the federal government in 1938 to desegregate public golf courses in Washington, and was part of a movement of black golfers who pushed the PGA of America in 1961 to remove its white-only rule.

Despite the ebbs and flows of the sport, which some of the women of Wake-Robin see as suffering a decline, the club renews its mission year after year by drawing young African-American women into its fold.

“The challenges are society itself. There’s not an app for that, you know,” said Kimberly Robinson, the club’s president and a member for five years. “You got to put in your time out on the course.”

One overcast Saturday in January, board member Phyllis Stevenson Jenkins passed a design of the save-the-date notice around her living room for the Wake-Robin Golf Club diamond and pearl jubilee. The notice, adorned with the club’s logo, marked its 80th anniversary scheduled to be held in June at a Maryland country club.

Off the living room, tall golf trophies stood on display. By the fireplace, a set of golf-club-handled pokers. Before the meeting, Jenkins’ husband flitted about to refill margarita glasses as about half of the club’s 53 members, representing four generations, lunched on baked tilapia and pulled pork sandwiches.

The women discussed the agenda items in planning for the June gala, which will be followed the next day by a golf tournament. The honorary chair will be D.C. congresswoman Eleanor Holmes Norton. Other honorees will include Debert Cook, the founder of African American Golfer’s Digest.

“In those days, to see a black girl playing golf, you were somebody, you hear me. Black women didn’t play golf. We were always in somebody’s kitchen.”Elizabeth McNeal, one of the oldest members of Wake-Robin Golf Club

The club’s perseverance can be partly attributed to the game itself. Golf is a game of physics, said one member, with distinct clubs and angles. And because one actually competes against the course, not other players, another member said, golf presents a leveled playing field.

Another key to the club’s endurance, Robinson said, is the willingness of longtime members to not just recruit new members, but to engage them in continuing Webb-Harris’ mission. Webb-Harris was the club’s founder and first president, and for whom the club holds an annual golf tournament in her name, started the club in 1937.

The mission of the club was to “perpetuate golf among Negro women, to make potential players into champions and to make a permanent place for Negro Women in the world of golf,” according to The Wake-Robin Papers, quoted in the book “African American Golfers in the Jim Crow Era”.

She added: “I loved those ladies. They were a model to me, and I wanted to be like them.” As some of McNeal’s friends dispersed from the club, many for marriage, McNeal said, “I got hooked on golf. It was something different.”

McNeal recalled how one club member gave her a pair of golf shoes and golf bag, because she couldn’t afford the apparel in those days, she said.

On a street car headed to the golf course, McNeal felt like “everyone looked at me like I’m something foreign, like ‘Who’s this little black girl, and where’s she going with a golf bag?'” she said.

“In those days, to see a black girl playing golf, you were somebody, you hear me. Black women didn’t play golf. We were always in somebody’s kitchen,” McNeal said.

Some caddies stole a golf club here and there from players they caddied for, and gifted them to her, McNeal said. “That’s how I got started.”

The women of Wake-Robin became revered in the D.C area and throughout the country for their efforts on and off the golf course, namely for their push to integrate public golf courses in Washington. Scholars have written that the club’s promotion of African-American women’s participation in golf lead to golf clubs in cities such as Atlantic City, Baltimore, New York and Philadelphia, clubs that continuously raised funds to help send their members to golf tournaments in other, less racially-stifling cities.

“We keep on getting younger girls playing golf,” McNeal said.

One of the club’s youngest members, Dionne West, 26, has been reviewing old photographs of the women of Wake-Robin, to promote and also attract a wider audience to the 80th anniversary event.

A particular sepia-toned image held West’s attention: a group of women posing with clubs on a golf course. They wore long skirts with knee socks. Some donned blouses with high necks and oxfords. “Wow, they were really there,” West remembered thinking.

At the 80th anniversary gala planning meeting, West suggested to the members sending a montage of images she has been collecting as part of the electronic invitation. West also thought a meet-and-greet networking event would attract young professionals. “That’s a great idea,” Jenkins said. West wants attendees, especially those who may have scarcely heard of the women of Wake-Robin, to glean something she has come to appreciate from her time as a member, “they just endure.”

As the anniversary tournament approaches, 98-year-old McNeal, who has played golf regularly since her early days at Langston until her illness last year, said: “I’m dying to hit the ball one more time.”

The Wake-Robin Golf Club is the oldest African American Women’s Golf Club in the United States. Their mission is to foster and perpetuate women’s interest in golf and encourage women in the Washington, D.C. Metropolitan Area to become golfers. 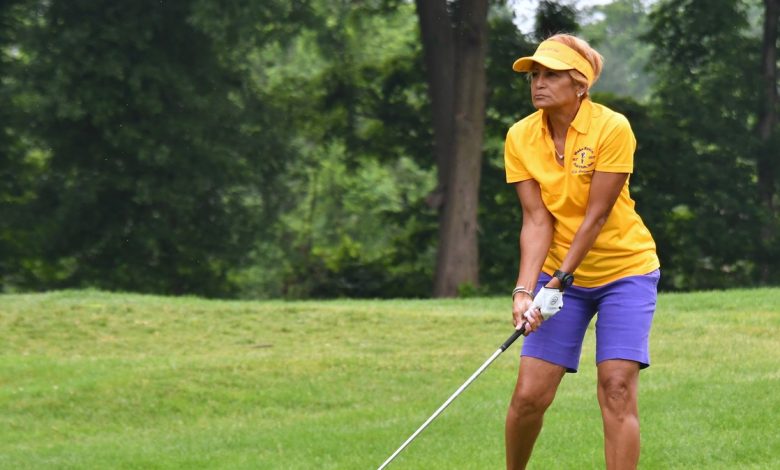 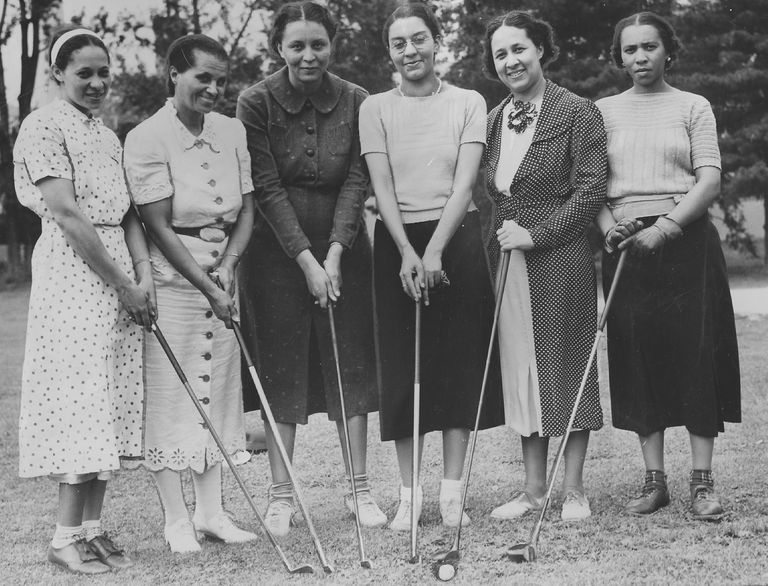 Bermuda Championship is still on Schedule

Has the Corona Virus spoiled all of golf for 2020?

Author Black Golf WirePosted on April 24, 2020April 27, 2020
Muhammad Ali’s passing at age 74 on a few years back follows decades of contending with the effects of Parkinson’s disease, but more than...
Read More

Everything you need to know about the new USGA Rules

Author Black Golf WirePosted on April 13, 2020April 30, 2020
The USGA and R&A have worked steadfastly to create a new world order of handicaps. The result is a system that every golfer in...
Read More

Michigan Golf Courses are back in business!