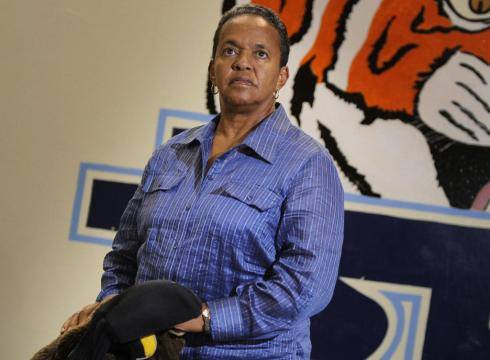 Catana Starks, who made history in 1986 at Tennessee State when she became the first Black woman to coach a men’s NCAA Division I golf team, died Sunday in Nashville. She was 75.

Starks’ trailblazing story was documented in the film “From The Rough” in 2011 starring Taraji Henson.

In 2005 Starks led TSU to the the National Minority Golf Championship. The team shot a record-setting 840 as a unit. It was Starks’ final year as the coach.

In 2014, Starks was inducted into the National Black College Alumni Hall of Fame, and, in 2019, TSU honored Starks by recognizing her achievements during a ceremony on campus. Starks, a Mobile, Alabama native, was a TSU alumnus and classmate of Olympic track great Wilma Rudolph. In 1986, when TSU joined the Ohio Valley Conference former athletics director Bill Thomas dropped the schools swimming program and added men’s golf.

Starks was the school’s swim team coach at the time. The swim team was not sanctioned by the NCAA. Starks, who earned her doctorate degree during her time as coach, also served as head of TSU’s Human Performance and Sports Sciences department.

During her time as TSU’s golf coach, Starks guided several successful players including Canadian Sean Foley, who went on to become Tigers Woods’ swing coach, Sam Puryear, who became the first Black men’s head golf coach in a major conference (Michigan State, 2008) and is now the coach at Howard, and Robert Dinwiddie, who was an All-American at TSU and went on to become a member of the European Tour.

Raise Awareness for the cut of Hampton’s Golf Team