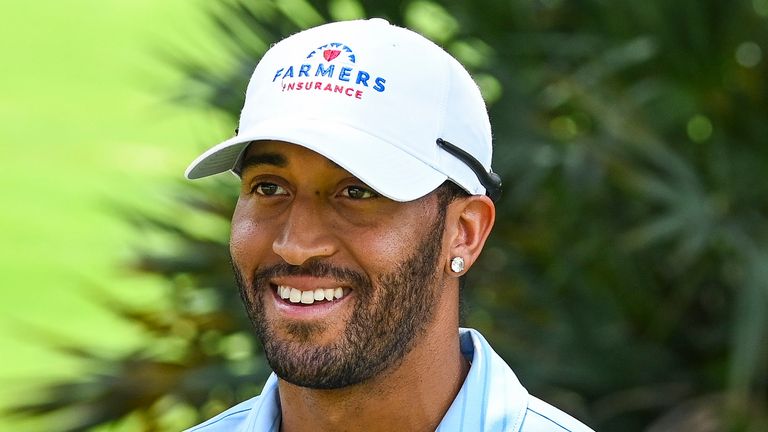 JACK RYAN:  We will go ahead and get started here with Willie Mack III at the Farmers Insurance Open. Willie is playing on a sponsor exemption this week, got into the field when Kamaiu Johnson withdrew yesterday. Willie, if we can just get an opening comment from you. How does it feel to be teeing it up it this week at Torrey Pines?

WILLIE MACK III:  It feels exciting. Starting off my week playing a practice round with Rickie Fowler and Gary Woodland yesterday on the North Course. I can’t start my week any better.

WILLIE MACK III:  Yeah, I started playing golf around 6 and just started playing with my dad because of Tiger Woods, and kind of went to college, played at Bethune‑Cookman University in Daytona Beach and kind of transferred over to my professional career. It kind of started out a little shaky first couple years, living in my car for about a year and a half, just struggling, traveling around, trying to make ends meet, and we’re here today.

JACK RYAN:  And then lastly for me before we open it up to some media that we have on the line with us, you were recently named the recipient of the Charlie Sifford Memorial exemption at the Genesis Invitational here in a few weeks from tournament host Tiger Woods. What did that exemption mean to you as you start to play on the PGA TOUR a little bit more here?

WILLIE MACK III:  Yeah, it’s amazing. Getting that call from the Tiger Woods Foundation, it was a dream come true. After I got off the phone, I called my dad and he kind of ‑‑ he started crying. Kind of made me tear up. But I’m excited to get going not only this week but at the Genesis also.

JACK RYAN: I was just curious if we can get your thoughts, I know you’re happy to be in the field, but it’s under some very difficult circumstances with Johnson coming down with COVID‑19.

WILLIE MACK III:  I know it’s a dream come true for both of us to get our first two starts the next four weeks and it’s just an unfortunate situation. I’m friends with Kamaiu, so I talk to him all the time, and I know he was so excited to play this week and I was cheering him on. I’m just going to go out there this week and not only play for me, but also play for him.

JACK RYAN: And sort of beyond that, what has been the highlight? Is it playing with Rickie and GW, or do you think that’s to come?

WILLIE MACK III:  I think just to come. I met Rickie last year, we did a clinic here with the kids on the range, so I kind of met him last year and I just ‑‑ it’s just an amazing opportunity to get out here for my first PGA TOUR event and get the week started.

JACK RYAN: I was wondering, so those years that you’re traveling around like sleeping in your car, can you tell us a little bit more about how rough that was to try to do that and play golf, and kind of what kept you going while you were going through that?

WILLIE MACK III:  Yes, it’s always a struggle kind of starting out, having no sponsors. I think it was 2011 was the last year you could go right to the PGA TOUR. It started out pretty good that first year, I won the Money List on the Florida Pro Tour, I made the second stage, I think I missed Finals by two strokes. So I kind of got into a little groove of maybe this is easy. Then the next two or three years after that, it was a struggle. I left home that summer and I told my dad I was going to go to Florida, I had no money. It just turned into a hassle and a struggle, but I just kept fighting and I’m here today.

JACK RYAN: Why did you keep fighting?

WILLIE MACK III:  I just never quit. My parents always taught me, if you start something, you finish it. I just always had that mindset and that mindset will always stick with me.

JACK RYAN: Do you have a sponsorship relationship similar to Kamaiu with Farmers?

WILLIE MACK III:  We’re both sponsored by Farmers Insurance. The CEO of Farmers Insurance, Jeff Dailey, he’s done everything for me and Kamaiu. He changed both of our lives for our career, and what he’s done for the diversity of the game, putting me and Kamaiu on board, it’s been amazing. Hopefully some bigger companies and CEOs follow suit and do the same.

JACK RYAN: I was also wondering how were you going to ‑‑ what was this week going to be like for you? Were you going to play at the event at The Crossings on the APGA and how were you looking at your preparation because of the sponsor’s exemption you have for Riviera? Does this all come as a little bit of a shock in some ways, too?

WILLIE MACK III:  Yeah, it was surprising learning the circumstances of Kamaiu kind of at the last minute. I played The Crossings last year, I actually won that tournament, but I was just getting ready for the pro‑am today and then we’re playing at The Crossings on Thursday and then having the APGA Tour on Saturday at the North Course, that was my preparation. You’ve just got to stay ready, you never know when the opportunity comes up and it came up this week and I’m ready to get it going.

JACK RYAN: Just wondering what your expectations are for this week and what you think your greatest strength or advantage will be?

WILLIE MACK III:  I’m trying to win just like everybody else, that’s every tournament I go to. I feel like everybody else that’s teeing it up this week feels the same. I think my greatest part of my game, what’s good this week, I have two starts in two PGA TOUR events in the next four weeks and I’m just going to go out there and have fun and see what happens.

JACK RYAN: If I’m not mistaken, weren’t you here last year, we met with you in the media center?

JACK RYAN: What was it like to be in the position you were last year and now to be playing this year?

WILLIE MACK III:  Just starting off in the media center with Jeff Dailey, there was a couple reporters there and that’s kind of how the Farmers situation came about for me and Kamaiu. It’s a little different this year, I’m doing a lot more interviews and things like that, but I’m excited for everything and it’s going to be a good week.

JACK RYAN: How did you play on the North a year ago on Saturday and what are your thoughts about how your game suits Torrey Pines?

WILLIE MACK III:  Last year was ‑‑ it was a lot different. I think we played the first nine holes in fog. We honestly couldn’t see off the tee boxes. We never played the course, so it’s a lot different this year. Teeing up on the first hole I could at least see the green. It was a big difference. The rough last year I feel like was a lot stickier and thicker. Playing it yesterday wasn’t as bad. I still know it’s going to be a good test.

JACK RYAN: How would you compare like a PGA TOUR course to what you guys have played in the past in the APGA and other events? I know there have been times when it’s been hard for the APGA to get on quality golf courses.

WILLIE MACK III:  Yeah, just the basic little chips around the greens, having flat tee boxes, I wouldn’t say it’s easier, but it makes just a normal shot a lot easier. Playing on greens that are bumpy, aeration holes, it’s tough, but playing plush fairways and greens and having thick rough, it’s exciting to play on and it’s a great test.

JACK RYAN: You talked about aeration holes. Haven’t you guys run into that in the past where you’ve literally played golf courses that have just been punched or whatever for your events?

WILLIE MACK III:  Yeah, we actually played at one of the tournaments last year, I guess they didn’t tell the Tour that they were aerating a week before or a couple days, so it was just like chipping. Like I said, just basic little chips, making those two‑footers, those become difficult when you have eight holes in the way. Like I said, I’m just excited to get out here this week and play on some great greens.

JACK RYAN:  Willie, we’ll wrap it up there. We appreciate your time and best of luck this week.

Life Changing Round of Golf at Quivira Golf Club

Featured Golf Professionals in the Industry

Will Golf Rise to Meet the Moment? Or Stay the Same.

Author Black Golf WirePosted on January 29, 2021January 30, 2021
Andy Walker, one of the 18 black players to ever compete on the PGA Tour reflects on the broken pipeline for African Americans in...
Read More

Author Black Golf WirePosted on April 25, 2020April 25, 2020
The amazing history of the Twentieth Century Golf Club and their impact or organizing golf tournaments across the Midwest and all the way to...
Read More