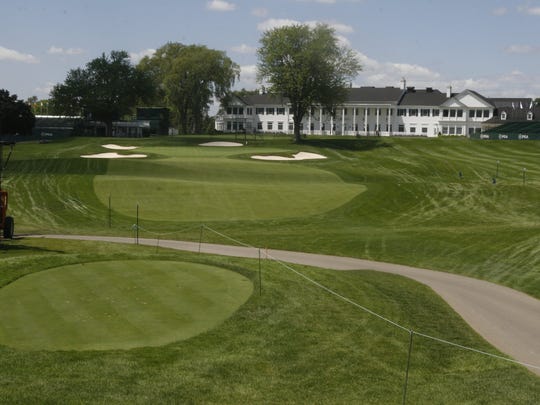 Michigan Golf Courses are back in business!!!! For now, at least.

Golf courses have been deemed non-essential businesses since Gov. Gretchen Whitmer’s stay-at-home order went into effect in March. But within hours of Friday’s news that Whitmer was allowing some businesses to reopen during the coronavirus crisis, Stonebridge already was returning to business as usual.

Whitmer extended the stay-at-home order through May 15, but she announced golf courses could re-open immediately “consistent with strict social distancing.” Golf carts remain banned, meaning players must walk the course, and other changes could be implemented to help keep golfers safe.

“Even though it’s just walking, the phone will not stop ringing,” Mervis said. “It’s crazy, awesome. I’ve already got people out, people coming and people online.”

Customer satisfaction is Mervis’ top priority, but he’s also relieved. Many of his employees have been out of work since the novel coronavirus began sweeping across the nation, killing more than 50,000 people in the U.S. and leaving some cities on the brink.

Mervis says there’s less anxiety about the virus now than when the outbreak began.

“It’s important for us from a revenue standpoint so we don’t go out of business,” Mervis said. “You worry at first, the first week it happens. Once you do research, you realize nothing is forever. We calmed ourselves down.”

The reopening of courses comes with restrictions, Mervis said. He’s closing the clubhouse, keeping cups on the green elevated and plans to abide by Whitmer’s golf-cart ban.

Mervis is advocating for one person per golf cart.

“There are already courses that are going to break that rule,” Mervis said, “but what we’re trying to do is keep the pins in, setting the cup up above the lip, no rakes, and we’re going to remind people to stay apart. Without carts, everyone has their own stuff.”

Jeff Stalcup, the director of golf at The Orchards Golf Club in Washington, said a free-for-all will only make matters worse. Even though golfers were calling The Orchards beginning at 11 a.m. Friday, Stalcup didn’t let them on the course until 1 p.m. to ensure safety measures were in place.

“We’re having someone driving around to monitor and make sure social distancing is being observed,” Stalcup said. “If they abuse the issue, we’ll ask them to leave.”

Moose Ridge Golf Course proposed guidelines to the governor on April 10 and asked golfers to sign a petition and contact Whitmer’s office to express frustration of the initial executive order.

The proposal from Moose Ridge included:

•    No one inside the clubhouse, restaurant, or pro shop

•    Possibly no pins or cups, suggesting circle in the center of the green

“With the above criteria, golf is therefore no different than a walk in the neighborhood, traveling to the park to go cycling and is far more safe than going to the store,” the email to golfers stated.

General manager Rory Godfrey said he will send a letter with safety recommendations to his members before anyone can return to play, but he’s looking forward to being back in business.

“I think a lot of people are going to appreciate the change,” Godfrey said. “Like any business, you want your clients to utilize what you have to offer.” Godfrey expects to have golfers at Oakland Hills by Saturday morning. There are plans for Oakland Hills to take various safety measures, similar to the guidelines the club suggested before Whitmer told private courses to cease operations.

Those rules included no non-members or golf carts. Flag sticks would be removed and cups would be elevated. Bunker rakes would be put away. Tee times, from 9 a.m. to 7 p.m., could only be made on the club’s website in 10-minute intervals.

“We will probably stay with what we allowed a few weeks ago,” Godfrey said. “Pretty close. I’m going to read the order like 10 times and make sure we stick to what needs to be done.”

Despite Whitmer’s announcement that allows golf courses to re-open, and other activities such as boating and lawn care to resume, , Godfrey isn’t optimistic that society returning to normal.

“I’d be cautious about that,” Godfrey said. “We still have a long way to go.”

Author Black Golf WirePosted on April 30, 2020May 12, 2020
Sifford was a professional golfer who was the first African American to play on the PGA Tour. He won the Greater Hartford Open in...
Read More

Has the Corona Virus spoiled all of golf for 2020?